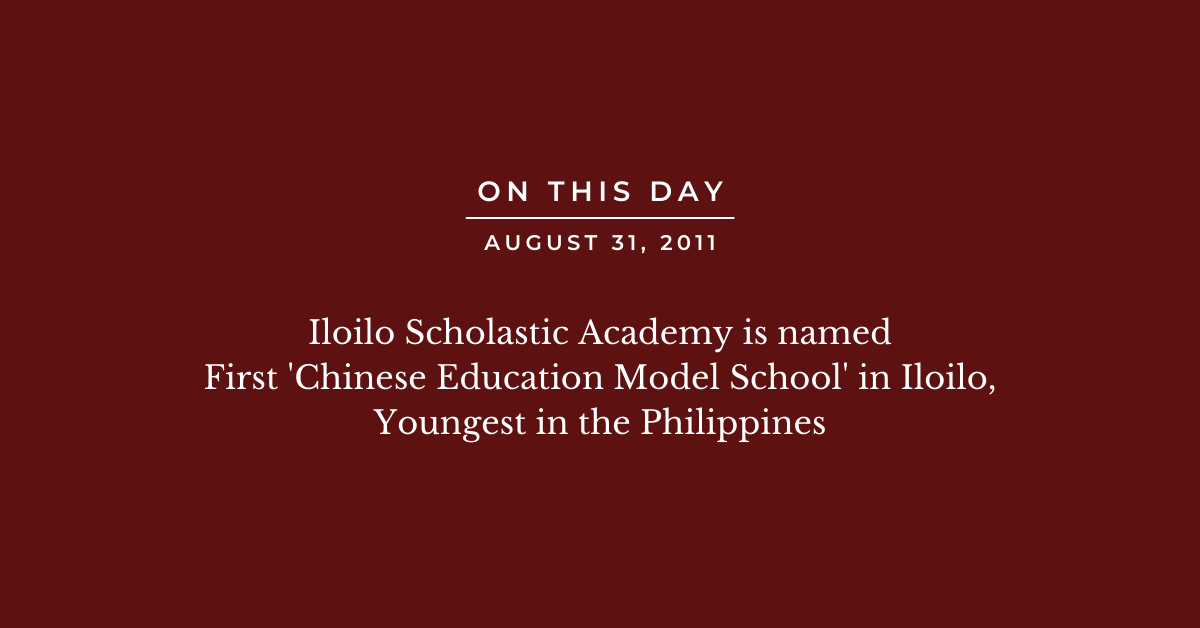 On August 31, 2011, ISA was among three schools in the Philippines to be conferred with the title of “Chinese Education Model School” by the Overseas Chinese Affairs Office of the State Council of China, making it the first in Iloilo and the Youngest in the Philippines to have received this award.

46 schools offering Chinese language curriculum from 14 countries: the Philippines, Thailand, Cambodia, Myanmar, Australia, Argentina, Germany, the Netherland, Sweden, Italy, Spain, Portugal, Canada, and USA, were conferred with this title. Representatives of these schools will receive the plaques in Xi’an City, China on 30 October 2011.

The first batch of 55 schools from 21 countries worldwide were awarded with the same title in 2009. Four schools in the Philippines, namely, Philippine Cultural College, Chiang Kai Shek College, Sacred Heart School in Cebu, and Tay Tung High School in Bacolod, were named. From what we have gathered, the selection process went through three tedious stages: verification, authentication, and evaluation of the documents submitted to the Office of the Overseas Chinese Affairs, PROC.

The conferment on 46 schools of the title ‘Chinese Education Model Schools’ and the awarding of plaques to 1751 outstanding Chinese language educators, and 189 famous social personalities took place right after the opening ceremony of the 2nd World Chinese Education Conference in Xi’an last 30 October.

The 4‐day conference formally opened in the morning of 30 October at the Grand Theatre, Sofitel‐People’s Hotel. Madam Li Haifeng, the director of the Office, delivered an opening speech. Nearly 600 delegates from 37 countries attended the opening ceremony.

The participants adopted thematic reports, group discussions, the general assembly, and other forms of communication to discuss the status of the overseas Chinese education, characteristics, problems, and how to seize opportunities to promote the great development of Chinese education.

On 2 December 2011, 4:30 pm, the unveiling ceremony of the ‘Chinese Education Model School’ plaque awarded by the Office of the Overseas Chinese Affairs of the People’s Republic of China to ISA was held at the entrance lobby of the school building.

ISA executive director, Mr. Peter M. Chan, welcomed the guests on behalf of the ISA president, Mr. Vicente Tiu. This was followed by the testimonials: first from the president of the ISA Learners Council, Dennis Ventilacion. Representing the facilitators, Mr. Rodgen Jabor recounted his eight‐year educational career at ISA. Mrs. Cheryl Baylen, president of ISA Parents Association, spoke on behalf of the parents; Eunice Serilo, now a third year Mass- Com student at UP‐Visayas, talked about her ISA school days where she recalled her struggle to meet the daily challenges.

The last to give testimony was the executive secretary of ISA Board of Directors, Mrs. Vina Jalipa. She expressed her gratitude to the ISA parents, and the many friends who had believed in the ideals ISA has stood for.

In their messages, Mayor Jed Patrick Mabilog and Dr. Corazon Brown highly commended ISA administration and faculty for attaining such a great feat in a short span of 8 years. Dr. Brown observed that her skepticism of finding a young school to attain such a remarkable achievement was appeased after hearing the testimonies. She said, with ISA’s impressive track record, DepED could be spared of the trouble to supervise another private school.